A requirement for trail riding is that all Jeeps have a CB.  Some install them and some carry a portable.  I don't plan on using a CB very often, but I needed one for the trail and don't like portable units.  The Jeep Wrangler has minimal space.  It isn't easy to install anything -- especially a big CB.  Fortunately I found the Cobra 75, which is a full-featured CB Radio that has all of the controls in the mic handset.  The antenna and mic connects to a small box that can be mounted just about anywhere.  The Cobra 75 also has a Weather band radio built in, which is nice feature as well.

Installing the CB is straightforward.  The hardest part is mounting the Antenna and running the power cord to the battery.  The bumpers are plastic on the Wrangler, so it took a bit of research to figure out the best antenna mounting location.  I came across a company called Cool Tech.  They make a JK Rear License Plate mount that comes complete with everything needed.  When installed the antenna looks like it's stock.

Here's some pics of the install.  It took me about an hour to complete the project. 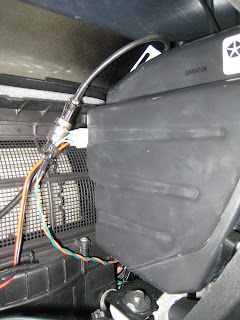 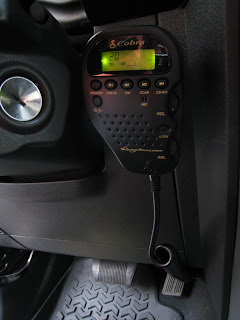 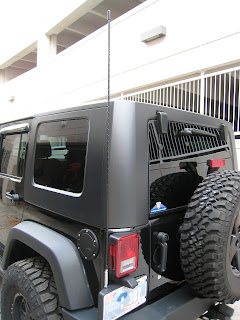 The top picture is behind the passenger glove compartment above the speaker enclosure.  This is the location where I mounted the control unit.  Picture number two is the head unit/mic control.  You can control all of the CB features from the mic.  The final picture is what the Cool Tech antenna looks like mounted to the license plate.  I also installed a quick disconnect, so I can pull the antenna and store it in the Jeep when not in use.